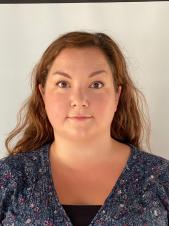 Danae represents the Highfields Ward and is a member of the following council committees and working groups:

Danae represents the town council on the following external committees/organisations:

Danae can be contacted:

I live in Dursley with my daughter who attends Dursley Primary School.
I'm originally from Thessaloniki, Greece and moved to the Stroud
District in 2004, where I finished my education at Sir William
Romney's School, Tetbury,as well as Cirencester College, and then
completed a BA in Theatre Arts at Middlesex University, London. I've
moved around a bit since then, having lived in Dublin for a short time
as well as spending some months back in Greece. However, I've always
seen the Dursley area as very much my home, which I have now
permanently returned to. Having lived here for four years, I've spent
my time attending local groups for parents such as MOBS Dursley, Tab
Family Café, and GL11 Family Fridays. I was a Breastfeeding Peer
Supporter for MOBS Dursley for two years, during which I loved the
opportunity to help local women connect with their babies. I've made
lifelong friends in this area.

During the pandemic I have been amazed but not surprised by the
strength of our community support system. I had suspected Coronavirus
back in March and was touched by my neighbours slipping their numbers
under my door in case I needed help, and the cashiers at my local Co
op saying they'd noticed I hadn't been in in a while.

My interests lie in equality, social justice and making Dursley the
best possible place to live. We're so lucky to live in such a
welcoming town surrounded by breath taking natural beauty and I look
forward to participating in its future.

Queens Platinum Jubilee: Picnic in the Park - Thank You. bit.ly/38WlXO6