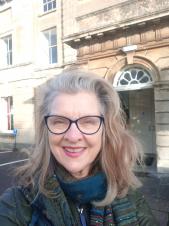 Theresa represents the Kingshill Ward and is a member of the following council committees and working groups:

Theresa represents the town council on the following external committees/organisations:

Trustee to the Twinberrow Foundation

Theresa can be contacted:

I am energetic and enthusiastic, have good literacy, computer and presentation skills and most of all, I like people. As an amateur musician (who plays locally quite often with my steel band) I am convinced that music and art can play a vital role in bringing a community together. I also think that the application of science can help our community to look toward the future. Dursley has a proud heritage as a centre of excellence in technology, and I'd like to see what else we can do!

I am Cornish and lived in London for over 30 years after becoming the first person in my family to go to University, then moved to the Wotton area in 2012. I have lived in Dursley since February 2019 and am very happy to be part of such an interesting and vibrant community. I retired from a lifetime of teaching in 2016. I have two adult children, a son who is a musician and a daughter who is living with me at the moment, but no grandchildren yet!

In London I had been a school governor, worked on PTA committees and taught mostly in Further Education, teaching science. I also spent time in a government quango, which was useful in terms of understanding a little about how the machinery of government works. Whilst in Kingswood village I became Chair of a choir that I had joined and also helped to run the village fete every year by joining the committee. I have made, and retained, friends from across the community and political spectrum.