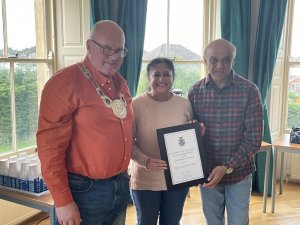 The recipients of the 2022 awards were announced at the Annual Assembly on the 26th April 2022.

Jude is one of the founding members of the Pop-up Garden Café who set up the venue 18 months ago. The Café is held at the Chantry Centre on Wednesday and Saturday mornings, 10 till 12. The Café is purely run and staffed by volunteers, who are rostered by Jude on serving and baking duties. Being now in overall charge of the café, Jude has to attend extra mornings to ensure stocks are ready for the following day. Without this time put in by Jude the Café venture would not have been the success it is today.

Many residents from Dursley and Cam may know Helen from her various other volunteering roles with Riding For the Disabled and the Stroud District Cats Protection.

This nomination is for Helen's additional work over the last few years. During Lock Down she has helped with the Covid vaccinations at the Vale Hospital. She also became involved with the Dursley Food Bank, attending three times a week, being available for delivers and also dispensing to those in need.

Helen also manages the administration of the annual "Flower and Produce Show" held at the Chantry Centre each year. This was one of the very few Community events that did take place in the Covid Crisis. This allowed people get back to socialising in a safe environment for the first time in six months. Helen cajoled Judges and marshals to help in the successful running of this ongoing event.

Eric is a litter volunteer based in Dursley, who is regularly seen carrying out litter walks within the Dursley area and has "adopted" a number of lay-bys on to highlight the problem of vehicle thrown litter. Eric has collected tens of thousands of items of litter during his walks, with some dating back to the 1980's.

Eric campaigns for companies including supermarkets, fast food outlet petrol stations etc to clean up in and around their premises and encourages local schools to "do their bit" by educating young people about litter and clearing litter generated by students.

Most recently Eric has been providing / collating comments on the Stroud District Council draft bin policy and a highways bin survey along the A419 / A38 spanning some 16 lay-bys between Berkely Heath and Cros Keys Roundabout.

Vijay and Tika Patel purchased the Newscentre in Silver Street in 1988, and the newsagents store has thrived ever since thanks to their hard work.

But after more than three decades of 6am starts and trading in the heart of our town centre, they have decided to call it a day and hand over the reins to new owners.

During lockdown, the couple showcased the true meaning of community spirit by offering home delivery services to those in need of essential items, serving as a lifeline to vulnerable regulars.

They have provided a valuable service to the residents of Dursley, seven days a week over many years.

Queens Platinum Jubilee: Picnic in the Park - Thank You. bit.ly/38WlXO6