Annual Assembly (Meeting of the Town) 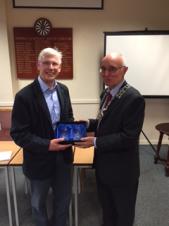 A successful 2016 Annual Assembly was held last night in the Community Centre, chaired by our new Mayor; Cllr Neil Grecian.

The Keynote Speakers; Councillor Nigel Moor, Cabinet Member – Fire, Planning and Infrastructure and Mr Alan Bently, Integrated Transport Manager from Gloucestershire County Council provided a presentation on local transport matters including ongoing reviews of the bus services in Dursley and the local area. Cllr Moor also provided an update on the Fire Service within the county. There followed a lively question and answer session and both speakers were warmly thanked for their participation.

The 2016 winners of the Annual Leslie D Gale awards were announced by Mayor Grecian, they are

Anne Anderson - for services to the community including volunteering at Girlguiding, Surestart and Dursley Cinema.

Emma Irvine - for services to the community including volunteering at the Tabernacle, The Vibe Youth Centre and The Door Youth Project.

Keith Thomson - The inaugural "unsung hero" awarded on behalf of keeping the town centre exceptionally clean and tidy and recognition of being a great ambassador for Stroud District Council and Veolia.

A special award was made to Geoff Wheeler, recently retired District Councillors and leader of Stroud District Council, for his outstanding service to Dursley over the last 25 years. The photograph shows Mayor Grecian presenting the award to Geoff.