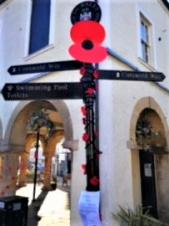 The Remembrance Day Parade will be held on Sunday 12th November 2017 in Dursley. The parade starts at 2:30pm, muster at the Bus Station, May Lane at 2:15pm. This will be followed by a Church Service and act of remembrance at the War Memorial gates at St James The Great Church, Dursley.

Traffic will be managed during the parade, expect delays.

The following road closures will be in place.

Top of Long Street, Dursley. Including the junction with Silver Street and Castle Street.