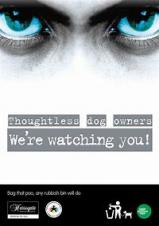 The campaign sets its sights on irresponsible dog owners, with recent research showing that dog walkers are more responsible and pick up after their dogs, when they think that they are being watched.

Last year Keep Britain Tidy conducted a campaign pilot, funded by the Department for Environment, Food and Rural Affairs (Defra), working with land managers across the country. This pilot saw an average reduction of 46% in the levels of dog fouling.

Feedback suggests that dog fouling tends to occur at night time and during the months with shorter days, as some dog owners feel that they can't be seen 'under the cover of darkness'. The 'We're watching you' series of signs are visible after dark, and use innovative cutting edge materials.

Mayor Neil Grecian said "We are thrilled to be working with Keep Britain Tidy, and being a part of such a cutting edge campaign. We hope that we will see the same results as the local authorities who have already signed up to the campaign."

The areas selected for signage are Highfields and Long Street, Dursley.