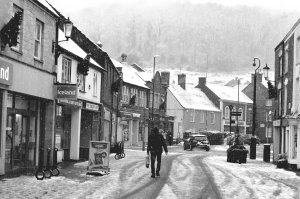 It looks like Dursley will be impacted by the winter weather on Thursday and Friday which is currently affecting other areas of the Country.

Don't be put off clearing paths because you're afraid someone will get injured. Remember, people walking on snow and ice have a responsibility to be careful themselves. Don't believe the myths - it's unlikely you'll be sued or held legally responsible for any injuries if you have cleared the path carefully.

Follow these simple steps set out in the Government's Snow Code:

Grit provided in grit bins is for use on public pavements, paths and roads only − not private property/driveways.

School Closures
Gloucestershire County Council have a page on their website which advise on any schools that have to close:

Refilling of Grit Bins
Following a couple of enquiries to the office and reports of grit bins needing filled. Please report this to Gloucestershire County Council on 08000 514514. Unfortunately Dursley Town Council do not have the resources to stockpile salt for refilling grit bins during the winter season.

Thanks to local resident Mark Hughes for permission to us the photograph of Parsonage Street during the last period of snow.