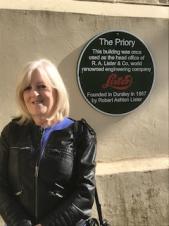 The unveiling of a plaque to commemorate R A Lister took place on Saturday 7th April at The Priory in Long Street. The plaque is situated on the former office building of the world renowned engineering firm, founded by Sir Robert Ashton Lister in Dursley during 1867.

Approximately 100 people witnessed Mayor Neil Grecian unveil the plaque, the crowd included many ex-employees of the company and members of the Lister family. The Mayor said "The closure (R A Lister) in 2014 was sad for the whole town and as a council we wanted to do something to ensure that there is something permanent in the town for it to be remembered by."

The Mayor Would like to thank Cllr Jan Burdge and the other members of the Dursley & Cam Society for their efforts in arranging the plaque which was supported by Dursley Town Council.

Cllr Jan Burdge is photographed with the new plaque.