A Memorial to Brian Marsh 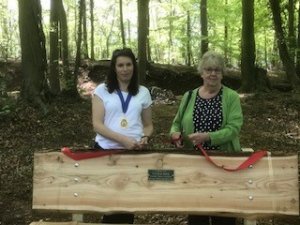 On Saturday 5th May; family, friends and former Council colleagues met at Twinberrow Woods to unveil a new memorial bench for our former Cllr Brian Marsh.

Brain sadly passed away in November 2016. The Councillors and his family agreed that he would like to be remembered in this way. Brian was vary passionate about preserving and looking after local woodlands.

The Deputy Mayor, Suzi Abraham thanked those for coming and recalled the time she first met Brian, then invited Brian's wife; June, to cut the ceremonial ribbon.

The Town Council would like to thank local resident Ray Pekala of the Breakheart Quarry Project who made the bench from local wood.