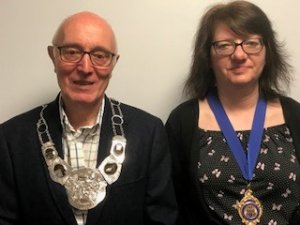 The Town Council hosted the Annual Meeting of Council last night (Tuesday) and the first order of business was to appoint a Mayor and Deputy Mayor. Cllr Neil Grecian was unanimously voted to continue as Mayor for a third civic year.

Following the decision by Cllr Suzi Abraham to step down as Deputy Mayor due to work commitments, I am pleased to report that Cllr Mandy Woodward was voted as the new Deputy Mayor.

Mandy who joined the Council in 2017 has quickly become a vital member of the Council and continues to support many local organisations in Dursley.

In what was a busy Council meeting, the Councillors received a final report from PCSO Oli Clark, who leaves the Dursley Neighbourhood Police team later this week. The Council resolved to press ahead with a town centre CCTV which will enhance the existing CCTV coverage and include areas of the War Memorial Recreation Ground.