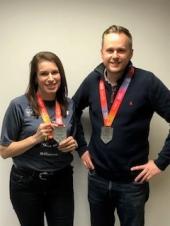 Dursley Town Council was represented in the recent London Marathon by two of our Councillors. Deputy Mayor Suzi Abraham and our newest Councillor, Adrian Whitwell were both competing in their first marathon.

Suzi represented the charity; Sense and raised over £2,100. Sense are a national disability charity that supports people with complex communication needs, including those who are deafblind, to be understood, connected and valued.

Suzi said "Running for a charity really does encourage and inspire you, when you don't feel like getting up early on a cold winter Sunday morning to go for a 20 mile run in the rain, knowing that everybody that has donated and sponsored you have every faith in you to complete the task, makes you do it!"

Adrian was running for personal achievement commented "I wanted to join the 1% of the population who will ever run a marathon. It just happened to then be the hottest ever London Marathon on record."

Both Suzi and Adrian have kept their running shoes on and have completed an additional 3.7miles in memory of Matt Campbell a participant in this year's London Marathon who sadly died after collapsing during the race.

Mayor Neil Grecian congratulated Suzi and Adrian by commenting "both should be very pleased with their efforts and did remarkably well to complete the marathon in what must have been very difficult hot weather conditions".