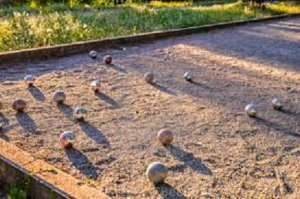 Dursley Town Council is pleased to announce that the installation of a Petanque Court at the War Memorial Recreation Ground will soon be complete. We have secured a grant of 50% towards the costs of this investment from Sport England.

Local resident and keen Petanque player John Roberts approached the Town Council with a proposal for a Petanque Terrain in Dursley. He said 'Petanque, also known as Boules is immensely popular, played all over the world and there is a thriving Petanque scene in the UK (with over 170 clubs registered with Petanque England) and countless more in pubs, clubs and parks.

The game is one of the most inclusive activities available where people of all ages, gender, ability and fitness can participate equally together. It is a simple game to learn, involving gentle exercise, played as singles, doubles or a triple game. Playing the game provides numerous benefits including health, social and physical to name but a few. It can be played one-to-one or in teams of two or three. It is played with hand-sized hollow metal boules on various types of dirt or gravel surfaces (terrains) the object of the sport is to get as many of your team's boules closer to a small wooden target (jack) than that of your opponents.

In Dursley, there are two existing groups of players (Dursley Rotary Team and a U3A group) who have to play out of the area at present. Over time we would like to set up a Cam and Dursley Boules Club, with two or three club sessions each week, and a team playing matches in the Cotswold League. We will also be offering some taster sessions to attract players, families and club competitions.

The Petanque terrain will be officially opened in the Autumn and a number of taster sessions will be run to encourage people to come and have a go. Dates will be arranged soon. This free facility will be run on a turn up and play basis. Boules will be available to borrow from 'The Pulse' in return for a refundable deposit.

If you would like to receive further information about the future Cam and Dursley Boules Club please contact John Roberts by email at: boulescamdursley@gmail.com

Shop Local – support your Town Centre safely and tell us about your favourite businesses bit.ly/2ZNepEJ