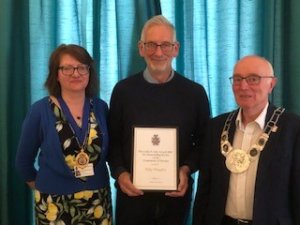 The Nominations for the 2020 awards to be announced at the town's Annual Assembly on the 28th April 2020 are now OPEN.

To be considered for the 2020 awards, nominations must be received on or before Friday 27th March 2020.

One of last year's recipients, Mike Doughty is shown in the photograph collecting his award for Outstanding Service to the Community of Dursley.