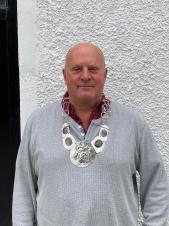 At last night's "socially distant" annual meeting of the Town Council meeting, Cllr Symon Ackroyd was unanimously voted as the Town Mayor for the civic year 2021/22.

This was the first "face to face" meeting of the Town Council since March 2020 due to the Covid-19 pandemic.

Cllr Ackroyd becomes the 13th Mayor of Dursley, succeeding Cllr Neil Grecian who stepped down from the role after 5 years. Cllr Grecian is the 3rd longest serving Mayor since the position was created in 1974.

The Town Council also appointed the Committee Chairpersons for the following year: