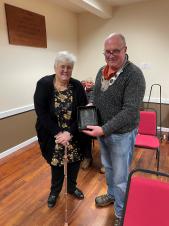 At last night's Council meeting the Town Council, the Mayor and current Councillors took the opportunity to thank our former Town Councillor Jane Ball in recognition of her 22 years' service as Town Councillor.

This service included a ten-year term as Mayor between 2005-2015, making Jane the longest serving Mayor of Dursley since its creation in 1974.

Jane received a plaque and bouquet of flowers from the current Mayor, Cllr Symon Ackroyd.

The Councillor vacancy created by Jane's recent resignation was filled at the same meeting of Council. Cllr Theresa Kinnison was co-opted to Council following a ballot. The Council would like to thank all the local residents who expressed an interest in becoming a Town Councillor.