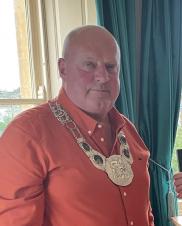 At the Annual Meeting of Council on 3rd May, Cllr Symon Ackroyd was unanimously re-elected for a second term as Town Mayor and Cllr Mandy Woodward was re-elected as Deputy Mayor for a fifth term.

With regard to the Council's committees the following Councillors were elected as the Committee Chairs for 2022/23: