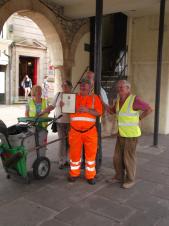 The Nominations for the 2017 awards to be announced at the town's Annual Assembly on the 23rd May 2017 are now OPEN.